Reflections on Youth Led Inquiry into Race and Racism (Part 4)

I've been writing sporadically about our classroom's informational writing unit about race and racism. At this point in our unit on race and racism, I'm very proud, but at the same time frustrated. Our students have learned a tremendous amount, and their informational posters are starting to come together. The other day, our class hosted visitors from Black Youth Project 100. When one of my fifth graders explained, "Race is made up. It was made up by Johann Blumenbach. He made up five categories and he put white people at the top because they were the most popular," I felt a real sense of accomplishment.

At the same time, making sense of race and racism is still presenting several challenges. I feel like my students are still struggling to understand how manifestations of racism relate to the more theoretical concepts. There are also several kids who interchange slavery and racism. This is understandable because they've learned that they are so intertwined, but it can lead to some factual errors like stating that Rosa Parks fought against slavery. 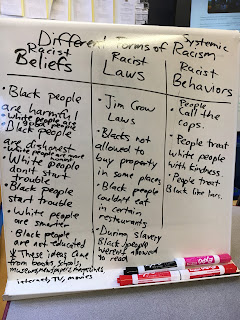 Today I tried to help a group of students with the idea of systemic racism. One of my students shared earlier that systemic racism is made up of beliefs, laws, and behaviors. So together we worked on generating examples.

The final product doesn't show the amount of pushing and questioning it took to generate these ideas. One of my students said, "White people don't want Black kids in their school, so they kick them out." I asked why. "Because they like white people better." Why?

It took a lot of "whys" to get to more specific language than good/better. At the end we got to some more concrete examples. And while the kids had trouble describing beliefs, they were pretty quick with explaining where beliefs originate from (books, museums, newspapers...). They also came up with examples of racist behaviors easily, and I just worked to connect each one to a belief.  I think the conversation I did today with a small group would be valuable to investigate with the whole class.

One of the challenges of this unit is that there is SO MUCH content to draw upon, that I feel that it's hard to make choices about what to present to the kids. For example I really wanted to use music more as a teaching tool, but haven't had that opportunity yet.

Overall, I'm learning a lot from the messiness of this first try. Even if the final result isn't perfect, I think the kids are excited about this topic and will be leaving with some powerful knowledge.
Labels: #BlackLivesMatter #educolor anti-bias education equity learning racism reflection social justice writer's workshop