Back to School in a Pandemic

For our first staff meeting of the year we gathered in Central Park. It was a surreal experience that was somewhat unsettling. It was also a tremendous privilege to have access to this beautiful outside space.
Early in our meeting we had to confront the news that the Department of Education and United Federation of Teachers gave conflicting reports as to whether our building's ventilation system is operational. Regardless, we are still expected to be in the building, because the deadline for fixing broken exhaust systems in Sept. 21 - the first day of in person instruction for kids. In other words, there is a different standard of safety for adults than for kids. Even if there's another explanation, that feeling is unshakeable. 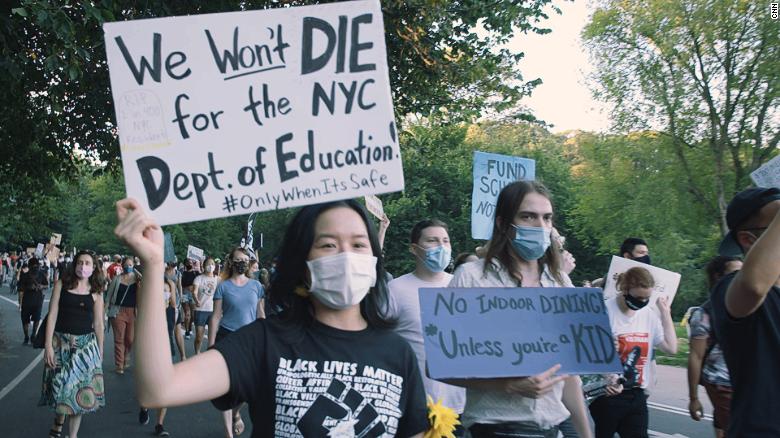 Source: CNN.com
Throughout the summer I was mostly ambivalent about school reopening. It seemed clear there were no good options available. The chance to return to seeing kids in person was appealing. But as July came to a close, and I started to pay closer attention, it became clear to me that the DOE's plan was shoddy. There were countless unanswered questions. So many details were left up to principals to hash out. On top of that, what was "figured out" wasn't practical, because we don't have enough people and other resources to do it.
Throughout August, my anger towards the mayor and the chancellor simmered. The inhumane devotion to capitalism ("Schools must open, because people have to go back to work!") was obvious. But I also felt that de Blasio's stubbornness smacked of hubris. I really feel like he wants to open New York City's schools, just so that he can say he did what no other major city did.
When I learned that the UFT's independent inspectors designated our school as ready, in contradiction to the DOE's report, I felt so betrayed. The UFT announced a deal with the city last week that promised "the most stringent safety standards in the country" and in doing so deflated the momentum building for a strike. This morning confirmed for me (yet again), that our union's leadership is not concerned with the needs of their rank and file workers.

Is this how labor unions are supposed to work? I'm confused. https://t.co/b8IIyRFnn5

It's worth noting that I was lucky to be at a school where this conversation even took place. Across the city, principals and chapter leaders did not even mention their school's safety reports. They were complicit with the DOE and UFT's "business as usual" approach to going back to school. Nonetheless, the conversation brought up a lot of anxiety for me.
As we discussed what to do as a community, there were ambulance sirens in the background. Someone shouted, "This is what we're going back to if we reopen!" In a moment my brain was flooded with the memory of New York City in March and April. I remembered the emptiness and the quiet, only broken by the constant sound of ambulances.

Even if it were physically safe for us to go back into our school buildings (it's not), I do not think we are in any way mentally prepared. Some people might say we are being melodramatic, but really I think we're just traumatized.

The task of preparing for a new school year was always gargantuan. Now we're trying to manage all the usual preparation, while wrapping our heads around a totally new model of schooling, and also dealing with PTSD. Today I felt like I had a constant strain in the back of my mind throughout the conversations with colleagues about how to arrange things in classrooms or ways to connect our first math unit to our first ELA unit. I'm exhausted and we're still a week away from the first day of school.