Talking about Brussels (and Ankara, Lahore and the Ivory Coast) with 3rd Graders

Wednesday morning as our daily morning meeting came to an end, one of my students raised her hand. A quiet, thoughtful girl, she wanted to know if our class would be doing something in response to the terrorist attacks in Brussels.

In the winter after the Paris attacks, we had put together a “peace party” as a show of support to victims there as well as Mali, Iraq and elsewhere. At the time, I wanted my students to know that while the attacks in Paris were horrific, there were other people hurting that needed our thoughts.

When asked about Brussels, I felt this concern once again. “Did anyone hear about the attack in Turkey?” The kids looked confused. Several were processing the fact that Turkey was in fact the name of a place and not just the name of a lunch meat.

As a third grade teacher I often struggle with what current events to bring into my classroom. My students are young and innocent, and I worry about scaring them with news of bombings and terror. But Wednesday reminded me (yet again) that these stories are often finding their way to my students, whether or not I like it. Thus it’s up to me to help them make sense of them.

At the same time, the stories that reach my students are often only those most publicized and sensationalized by the news media. This means that too often they are only getting one side of one story, rather than a full understanding of the world we live in. Therefore at this point, it’s no longer a question of whether I talk about current events with my students, but how to broaden the scope of events they are aware of.

The recent coverage of the Brussels attack, and the Paris attacks before, highlighted a real disparity in our media’s coverage of tragedy. Most of my students heard of the attack in Brussels, but had little to no knowledge of the recent attacks in Ankara or the Ivory Coast. 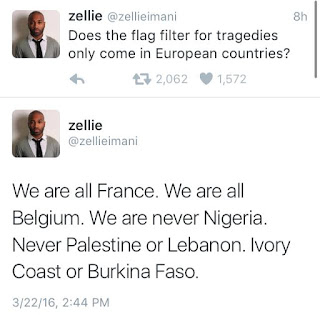 I don’t want to be the adult in my students’ lives who gives them a laundry list of global tragedy. But my goal is to get them to think critically about the media they ingest. When I spoke to my students on Wednesday, I described Turkey as a country with mostly Muslim people, and mostly people with brown skin. I described Belgium as a country that is mostly white people, and mostly Christian. Then I asked, “Why do you think we didn’t hear as much about Turkey?”

I realize my description of Belgium and Turkey is incredibly simplistic. Obviously both these countries feature a lot of ethnic and religious diversity. But when seeking a way to frame media bias for the young people in my classroom, this was the description I selected. And it struck a chord.

“That’s racism!” One of my students responded. “They only want to talk about the people who get hurt that look like them.”

There it is. #Justfacts from a girl who turned nine last month.

The stories we are told and the stories that are erased by the media are not accidental. And they are not simply a byproduct of for-profit models of journalism/consumer choices. They are the logical product of racism and white supremacy that courses through all aspects of our society. The sooner we see this, the better our chances of making a change.

When we met again this Monday it was in the wake of another terrible tragedy — this time the attacks in Lahore. More students had heard of the bombing, but few could name the country it took place in. Some of my students thoughtfully pointed out that while they had heard about the attack there was still more coverage focused on Brussels.

Whether or not I want to frighten my students, the media will continue to sensationalize and fear monger without my assistance. So in the meantime I want my students to be critical consumers of that media. Furthermore, I want them to pick up on the patterns of which people are featured in their media, and how those people are featured. Monday’s conversation showed me that there is power in this form of literacy.

There are ample examples in our current political discourse of people who have uncritically accepted the racist and Islamophobic narratives of our media. As teachers we have to make sure we provide our students with the tools to deconstruct these falsehoods, and construct truth by seeking out better information. Part of this work means being mindful of the information we choose to filter in our classrooms. If we only talk about Brussels and not Ankara or Lahore, we are not really developing critical thinkers.

In the fall my students wrote letters to Scholastic asking for more diverse characters in their Book Club Catalog. One student wrote: “Every time I go to the library, in my mind I’m like ‘Is there going to be some new Latino books?’ But I don’t see any. So I just buy Star Wars books. And I want to learn more about my country than Star Wars.”

During Wednesday’s conversation about which stories are told in the media and which are not, Kelvin reiterated this desire to learn more about the Dominican Republic . The absence of stories about many corners of our world is apparent to Kelvin. It is my hope as a teacher to help him find the words to name that absence and demand something better.

As teachers we should strive to teach students to look critically at the information they receive (and the information they don’t). We must also give them tools to find the narratives that are missing. And finally, for kids like Kelvin, we must give them space to tell their own stories, because clearly there is a void in our popular media.

I am proud of my students for their compassion for the victims in Brussels. I also hope to create a classroom community where we seek knowledge about the victims and heroes of countless untold stories in our world.
Labels: anti-bias education culture current events ecology of education racism social emotional learning student voice teachable moments tikun olam