An Old Problem is New Again

Today was the day of my formal observation. While I can't say it was a home run, I know that I executed a well-planned, focused lesson that included all the elements of balanced literacy. I fully expect to have earned an "S" (Oh, the joys of a binary rating system).

As so often happens with observed lessons, at least for me, my mind wasn't complete engaged on the immediate task at hand. While I taught, I tried to simultaneously see my classroom and my teaching through the eyes of my observer. It can be a bit disorienting, and I imagine it probably detracts from the instruction. But, I can't help it, and if nothing else, it prepares me for the impending constructive criticism.

So what did my observer and I see? For one I expect to get pointers on modeling more effectively and giving students a clear sense of the task. This has been an area I'm continually working on. However, I'm also expecting to hear about a problem that is new, sort of, and that's classroom management.

Now as anyone who's read my blog since its inception knows, classroom management was my greatest weakness as a first year teacher. My classroom represented every cliche represented in the early scenes of Dangerous Minds and Freedom Writers. The k 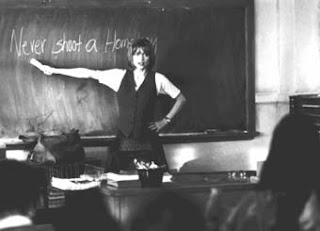 ids ran the classroom, and not in the empowering, democratic way I envisioned before I started.

But my second year was a vast improvement, and last year behavior was practically a non-issue. So, to struggle with it once again is frustrating to say the least. I thought I'd put those demons to rest. Now I'm wondering if the absurdly small class size I had last year (my Bronx standards at least) gave me a false sense of competency. With a class almost 50% bigger, my self-anointed classroom management skills are really being put to the test. And they're coming up short.

I've have a full system of consequences and rewards. These are earned by individuals, small groups and the whole class. They are also enforced consistently, and throughout lessons, the day, week and month. I emphasize positive reinforcement, and use consequences only when a student doesn't fix a problem. I believe in the system. I gotta...

So, what's going wrong? Unfortunately, I have to look back at my planning. Classroom management may have started for me as an issue of rules, routines and procedures. In this incarnation, it seems to be more about differentiation. I see most of the students who are most consistently off-task and/or bothering others are among the brightest in the class. So...obvious conclusion? They're bored. I'm not sure how to make a task like "read independently" more challenging for them, but I will endeavor to make every other assignment tiered for their level.

That's the thing about teaching. It's difficult to really solve a problem for good, as each year you're presented with a new set of personalities that combine in different and unexpected ways. Years of experience add up to a set of problem-solving skills, but they don't free you from challenges.