Is There a Prison Culture in Schools?

Since reflecting on the environment of my classroom and how joyful a learning experience I create for my students, I've continued to think about my school (and schools like it). It's no major news flash to say that the schools we're sending our nation's poorest children into are often bleak, joyless places. This isn't to say there aren't countless teachers out there who struggle to create brightly colored and joyous havens of learning within communities deeply afflicted by poverty. Nonetheless, many schools in the Bronx, throughout NYC, and across the country are dilapidated structures, incapable of providing the same sort of wondrous experience that brand new multi-million dollar green building might. And the structures are only one part of it.

A discussion with a couple of co-workers about California's prison-industrial complex segued into a conversation about the sometimes prison-like nature of our schools. "What are we really preparing our students for?" my colleague asked, thinking about the way the students are ordered (by bull horn!) to line up in the school yard, barked at to be silent the auditorium and generally expected to be seen, but not heard. The comparison became all too eery as I was watching an episode of Morgan Spurlock's 30 Days in which he enters jail for 30 days. As he was going through intake, the camera settled on this sign: 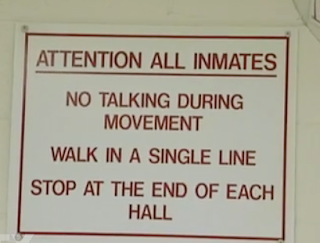 The sign immediately reminded me of a sign I created for my own classroom, a sign which I have to admit I was pretty proud of when I first printed and laminated it: 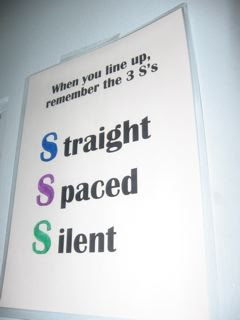 It wasn't a comparison that I felt good about. Nor was it a comparison I was realizing for the first time. In fact, when I first began my teaching, I was struck by the contrast by the almost magical quality of learning taking place in the classrooms and the sometimes cruel tone taken toward students in the hallways, auditorium and playground. While the need for quiet in the hallways to respect other classes that are in session is plenty reasonable, it's always seemed somewhat unrealistic to expect children of 5 or even 10, to walk from one destination to another in utter silence.
For my own part, I realized a few months ago that the 3 S's were no longer appropriate, and instead I instituted a game in it's place, which the kids actually love. The game's called "Rule of the Jungle." We pretend that we're walking through a jungle and if we're not totally quiet, we risk being attacked by wild animals. It gets the same result as the 3's, but the kids are actually having fun. Maybe it's still warped, but I feel like it's a step in the right direction.

I doubt many people working in urban schools around the country would appreciate this comparison between schools and prisons. I certainly don't think the similarity is intentional. Nonetheless, I wonder if in our endless pursuit of control and calm, we risk crushing some of the innate and most wonderful aspects of children's personalities.

jonathan said…
Absolutely... And many charters are far worse...